The short-tailed weasel (Mustela erminea) is Colorado’s smallest native carnivore.  In summer, this diminutive weasel sports a chocolate brown coat with a light underbelly.  In winter, it transforms to pure white except for a black tipped tail. In this white phase, the short-tailed weasel is often referred to as an ermine.

I have now photographed 56 species of the 70 species in my Colorado Mammals Project.  Of the 14 species that remain, ten are incredibly rare, if they even exist in Colorado at all.  The other four include the recently reintroduced Canada lynx, the Virginia opossum (our only marsupial), the invasive feral pig, and the short-tailed weasel (a.k.a. ermine).  It is the winter white ermine that I have set my sights on this winter and hope to photograph next.

Despite its tiny size, the short-tailed weasel is a formidable hunter and its slender body allows it pursue small mammals into their burrows. The majority of its diet consists of mice, and voles, but it is capable of taking larger prey including cottontail rabbits when given an opportunity.  Like other mustelids, the short-tailed weasel hunts daily to fuel its high metabolism.  Contrary to popular belief, weasels do not kill for fun and in the wild surplus food is cached for later consumption.

The Holarctic (circumpolar) distribution of the short-tailed weasel.

The short-tailed weasel ranges across the northern latitudes of North America, Europe, and Asia in a Holarctic distribution.  In the late 1800s short-tailed weasels were introduced to New Zealand by European settlers in an attempt to control the rabbit population (also introduced).  The impact on New Zealand’s native ground nesting bird populations has been disastrous. 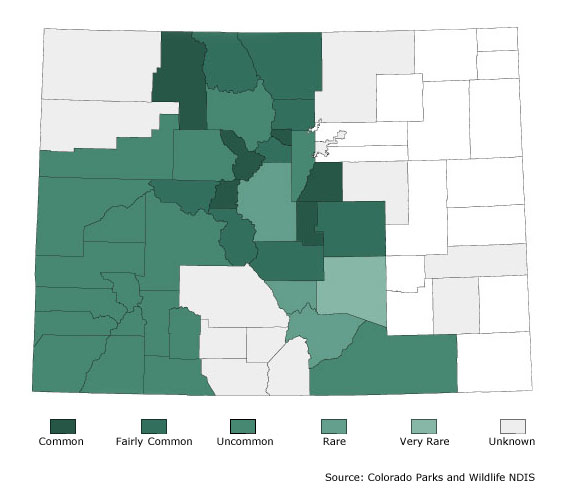 Abundance of the short-tailed weasel in Colorado by county. 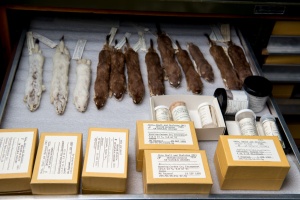 Mustela erminea specimens at Denver Museum of Nature and Science.

I have encountered and photographed several long-tailed weasels in the wild.  They are most easily seen in the summer months hunting pikas and rodents amongst the talus in locations such as Rocky Mountain National Park.  When I have encountered them, I have always been impressed and amused by their boldness and curiosity.  I have yet to lay eyes on a short-tailed weasel in Colorado or elsewhere but I have recently observed tracks at several locations that give me hope.

Because of their slender body and high surface to weight ratio, weasels easily lose heat to the elements.  During the cold and windy Rocky Mountain winter, the ermine spends much of its time tunneling in and under the snow hunting rodents beneath the snowpack.  This allows the ermine to save energy, but makes them even harder to observe.

Still, they can be seen ducking and diving in and out of the snow, and with time and patience I believe that I will be able to photograph one.  A promising number of skiers I have talked to have seen an ermine while on the slopes or from chairlifts.  Arapaho Basin Ski Area even has a run called “Weasel Way”, although I didn’t see any sign of weasels when I was there in December.  Nevertheless, I plan to continue my ski based ermine search until I succeed or the snow melts.

108 Comments on “Tracking the Ermine”